KAKO is featured at an exhibition at the National Football Museum in Manchester where they will be featuring his Menino de Ouro short film. The exhibition is called “Brazil+Football+Design.” The show opens today and will run until June 25th. Following is information about this amazing show!

Penalty Branding by Oz Design
In 2011, Brazilian sports apparel brand Penalty received a new positioning and a visual language that could consistently express its differentials, uniqueness and Brazilian-ness, in order to give form and content to its internationalization strategy. The project has been selected for the 10th Brazilian Graphic Design Biennial (2013) and recognized with two 2012 iF communication design awards: one for the branding project itself, and another for its exclusive Ginga typeface (designed by Ronald Kapaz and Luciano Cardinali), that combines the grace and sensuousness of curves with the precision and performance of straight lines. Ginga has also been selected for the Fifth Biennial of Latin-American Typography Tipos Latinos (2012).
Team: Ronald Kapaz (Design Director), André Poppovic, Guilherme Callegari, Eduardo Stollagli, BrunoTomé, Mariana Oliveira, Bruno Villardo (Designers), Aline Farkuh (Client Service Executive), Sonia Pimentel (Production Coordinator)

Fluminense Football Club Centennial Logo by Crama Design Estratégico
To celebrate the 100th anniversary of one of most traditional football teams in the country, its numeral was made into a sphere (as reference to a football), a tunnel (that emanates the idea of passing of time as well as amplifying it) and the Olympic rings – since the team is the only Brazilian recipient of the Coupe Olympique (1949). The project was selected for the 6th Brazilian Graphic Design Biennial (2002).
Team: Ricardo Leite & Rafael Ayres (Design Directiors); Nako & Daniel Neves (Designers).

National Anthem Poster by Visorama
Designed and hand-lettered by Cláudio Reston in 2006 for the exhibition World Cup on Posters held in Rio de Janeiro – on the occasion of the 2006 FIFA World Cup Germany –, the poster features the lyrics for the Brazilian national anthem, played on every football match. Four years later – around the time of the 2010 FIFA World Cup South Africa – Visorama began using it as a timeless promotional piece. In this new format, it has been selected for the 10th Brazilian Graphic Design Biennial (2013).

Garrincha stencil by Eduardo Denne
Within the last decade, Rio-based graphic artist Eduardo Denne has been developing an independent project named [CDR] – initials for Cultura de Rua (Street Culture) – comprised of stencil posters featuring once popular 20th Century Brazilian celebrities. Undoubtedly, among a wide range of singers from the Radio age, fringe graphic poets, spiritual leaders, best-seller writers and TV show hosts, the most popular one is two times World Champion (1958 and 1962) and Botafogo de Futebol e Regatas footballer Mané Garrincha (1933-1983). Garrincha was the most outstanding player of the 1962 FIFA World Cup in Sweden, where he received the World Cup Golden Ball for player of the tournament, the Golden Boot as leading goalscorer, and was named in the World Cup All-Star Team. He was also named in the FIFA World Cup All-Time Team (1994) and World Team of the 20th Century (1998). Photos by Ed Sartori.

The Evolution of Football infographics by Placar
Series of double-page infographics – that could be removed, turning into posters – published in 2009 over ten issues of Placar, the most traditional sports magazine in Brazil. Blending realistic and vector graphics and 3D modeling, it presents – in detail and chronological order – major changes, improvements and curiosities of football since its inception. Awarded at the 18th Malofiej International Infographics Awards (2010), organized by the Spanish Chapter of the Society of News Design (SNDE), and selected for the10th Brazilian Graphic Design Biennial (2013).
Team: Rodrigo Maroja (Art Director); Luis Eduardo Ratto & Bruna Lora (Designers); Luiz Iria, Sattu, Céllus, Jonatan Sarmento and Marcelo Garcia (Illustrators).

Samba typeface by Tony de Marco & Caio de Marco
The Samba family was inspired by the lettering art of J. Carlos, the greatest Brazilian illustrator and graphic artist in the 1920-1930s. Designed by São Paulo-based brothers Tony and Caio de Marco, of Just in Typefoundry, it was one of the winners selected during the 2003 International Type Design Contest sponsored by Linotype GmbH. Besides being used internationally in a number of publications, posters and logos, Samba is discreetly featured in Nike’s official Brazil National Team kit for the 2014 FIFA World Cup Brazil (by Nike Creative Director Martin Lotti and Brazilian designer Bruno Big): behind the crest, on the inside of the jersey, there is a printed slogan “Nascido para jogar futebol” (Portuguese for “Born to play football”) set in Samba.

Gatorade Corinthians Libertadores 2012 Website (2 minutes video) by Estúdio Colletivo
A tribute to the winner of the 2012 Copa Libertadores de América, the 53rd edition of the South America’s premier international club football tournament organized by CONMEBOL. São Paulo-based club Corinthians won its first Libertadores title defeating six-time champion Boca Juniors in the finals. Awarded in the 10th Brazilian Graphic Design Biennial (2013), the website impressed the jury with the unexpected use of illustration to present this timeline – when the obvious and easiest solution would be photography – and its impeccable art direction.

Ronaldo Fraga Summer 2013/2014 Collection (2:30 minutes video) by Ronaldo Fraga
Ronaldo Fraga, one of the most talented and original designers in Brazil’s contemporary fashion scene, transformed the 2013 São Paulo Fashion Week runway into a dirt football field with bamboo goals reminiscent of Brazil’s 1940s. His Summer 2014 Collection FUTEBOL is a tribute to the Golden Age of Football (1930-1960) and Afro-Brazilian heritage: models wearing steel wool wigs trotted down the catwalk in outfits inspired in the country’s soccer roots. Video by Prototipo Filme.

2014 Fifa World Cup Brazil Host Cities stamps
The Brazilian Post Office Service launched a special issue of 6000.000 stamps based on the twelve host cities posters created for the Fifa World Cup 2014 Brazil. The imagery presented well known visual aspects of the cities – such as the playful footballer against Rio’s Sugar Loaf mountain, and the 360º surrounding skyscrapers in downtown São Paulo – in a very colorful way that translates the energy and joy of the game for Brazilian people. Art by Julia Gostkorzewicz & Eduardo Leichner, Mariana Hardy, Maurício Pamplona, Romulo Castilho.

Illustrations by Gustavo Duarte
Currently one of the most prominent graphic novel authors in Brazil, São Paulo based Gustavo Duarte spent over a decade doing editorial cartoons and caricatures for sports newspaper LANCE!, such as the portraits of footballers Ronaldinho, Ronaldo, Rivaldo and Lionel Messi featured in this exhibition. He often does pro bono work for the teams he is fond of, such as the t-shirt for São Paulo Futebol Clube at the FIFA Club World Cup Japan 2005 and the poster “Volver” for EC Noroeste, or for São Paulo’s most famous football themed bar São Cristovão.

LANCE! Caricatures by Mário Alberto
As the main cartoonist in Brazil’s main sports newspaper LANCE!, Rio de Janeiro-based Mário Alberto has glorified and bashed every single Brazilian team and its leading footballers, as well as covered every World Cup since 1998. The caricatures of Brazilian footballers Bebeto, Garrincha, Pelé, Ronaldo and Neymar, as well as Manchester United’s Wayne Rooney and 2010 World Cup oracle Paul the Octopus were all published in LANCE! newspaper (1998-2014). 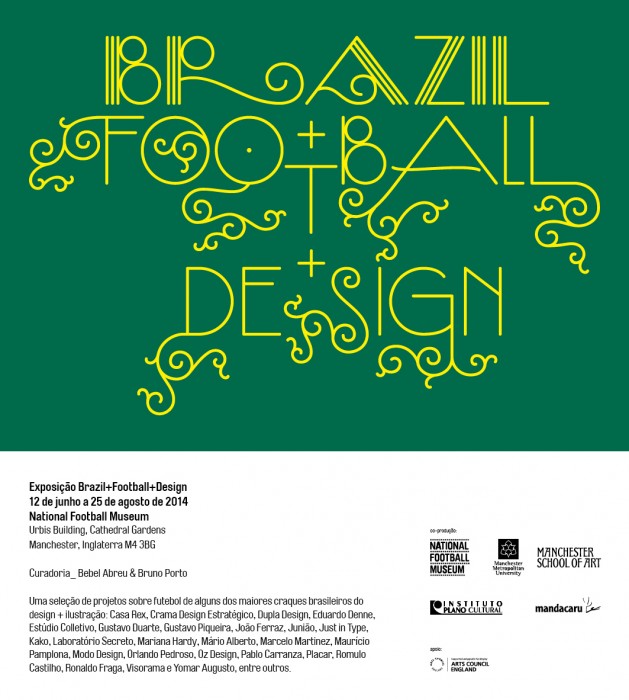 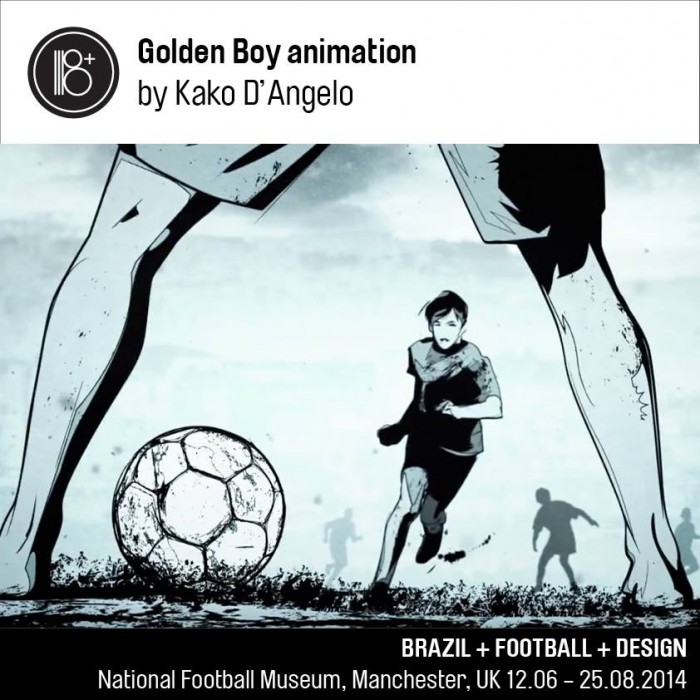