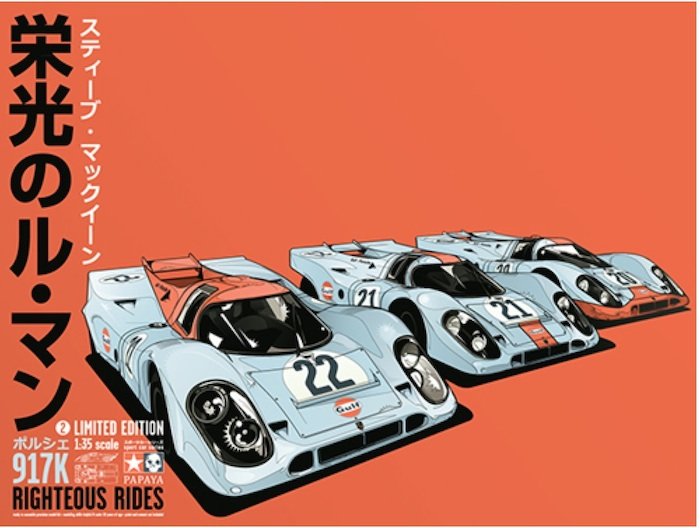 The Porsche 917K is an icon of racing.

It’s the car that gave Porsche its first overall win at the famous 24 Hours of Le Mans race, and the car that Steve McQueen drove in the 1971 movie Le Mans.

When São Paulo, Brazil-based illustrator Kako was invited to contribute posters to an exhibition about famous vehicles from the movies, he knew he wanted to illustrate the Porsche. “I believe it was a good option because not only I could pay homage to a great movie but also to the car that dominated the tracks in its time,” he says.

The assignment came from Adam Smasher, owner of the Hero Complex Gallery in Los Angeles, for the exhibition “Righteous Rides and the Dudes Who Drive Them!”

“An invitation such as this can drive you crazy due to the numerous options you have available,” notes Kako at his website. In order to keep his sanity, he decided to work quickly. “Once I knew what I wanted I shut down all other options and moved forward to designing it before any second thoughts or regrets take over,” he adds. 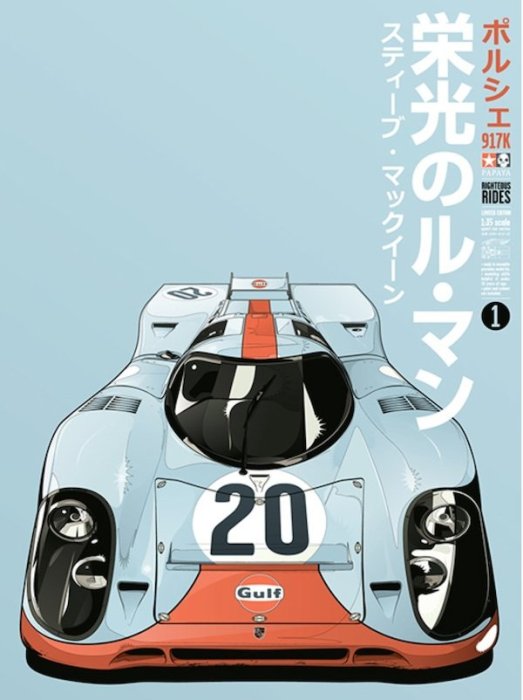 His goal was to create an illustration that was sleek and fun. “I really wanted to make a clean design, focusing on the car and the famous colors of the Gulf-Porsche team livery,” he says. His inspiration, he says, was the artwork that appears on Tamiya model car kits (see below).

“All I had in mind was, ‘How would I approach the illustration if Tamiya asked me to work on one of their boxes?” he says.

The final poster was named a winner of the Latin American Ilustracion 3 competition. Another series of illustrations by Kako — intricate posters celebrating rock-and-roll legends — were also selected for LAF 3.

Growing up, Kako drifted toward art because, as he told DFLA in 2014, “I feared the continuous routine of doing the same things everyday forever and ever.” He got his first job, at an advertising agency, at age 18. Later he studied art in college but decided he didn’t “fit in” there and dropped out to teach drawing at a friend’s comic-book art school and to work as a freelance graphic designer with his brother. Later, a tech company hired him to work as a web designer.

“Illustration was always part of my life but never the center of my attention,” he said. “I occasionally did a job or two for magazines and newspapers, but I never thought to follow it as a career, because I didn’t want to be stuck doing one thing forever. But soon I realized that by being an illustrator I could be right in the middle of it all.”

He is currently working on another poster for Hero Complex Gallery and the cover for a young-adult book from Scholastic, as well as advertising assignments.