Levy Creative Management artist KAKO illustrates a beautiful graphic image for Playboy Magazine’s May Issue. This assignment turned into one of the most fruitful research projects about the theme. The article is about Playboy’s own Indonesian editor Arnada who was arrested for “indecency” for publishing Playboy. As art director Rob Wilson indicated this story is a “sometimes harrowing account of crushing freedom of the press, Muslim extremism.”

Kako confesses that he got a bit obsessed over the cover of the first issue. He saw so many symbols that he had to do at least one sketch using them. What intrigued Kako the most was the red covering of the whole cover. There are no skin tones nor any white that would clearly shine from her earrings and dress. Just plain red. Kako thinks it was intentional, they were definitely playing safe not showing her skin. Also red sells! And red sells because red is hot, it’s attraction. And curiously red is the opposite color of Green, which is the color of Islam. The idea is subtle but it’s there. And the lamp…it’s a woman holding a lamp, a woman bringing light to what most would say a country with a dark age mind. Is she bringing enlightenment to Indonesia? Does she want them to be more open minded? Kako believes it’s a hell of a cover, graphically not so much but conceptually…wow!

What Kako wanted to do is replicate the cover. Do it exactly as they did: the girl, the earrings, the dress, the lamp. The difference would be that she is not looking at you anymore. She is in the same position, but her eyes are now shut, no smile, just an empty face of a woman who cannot express herself anymore. And a broken lamp. Censorship. Violence. Violence against free thinking.

Kako originally made two versions, the red which would be a direct connection with the original cover and a green which would symbolically means that we’re under the influence of the government/religion.

While researching about Indonesia Kako came across some information about their fauna and flora. He didn’t want to use the usual “bird in a cage” idea, so he decided to look for a flower and found the Sampaguita flower, commonly known as Arabian Jasmine (Yes, the Disney princess). It is also the Indonesian National flower since 1990. The flower grows in bushes and vines which can be considered “wild” and in some parts of Asia is the symbol of the beautiful women. Bulls eye!

Kako likes the fact that Arnada said “You can put me in a prison, but my ideas, spirit and thoughts will remain free.” He thinks that’s how it works in nature, you cannot stop a growing wild flower, there will always be an insect to pollinate as with us there will always be someone to spread your ideas around.

This artwork is intended to be more oppressive. Cipinang corridor, we look directly to Arnada’s cell. On the foreground a guard is standing next to the cell, we see a typical army boot and under it a crushed sampaguita flower. The government against the people, censors against free thinking. After all his imprisonment was clearly a political decision, it had nothing to do with what was published or the “public indecency”. 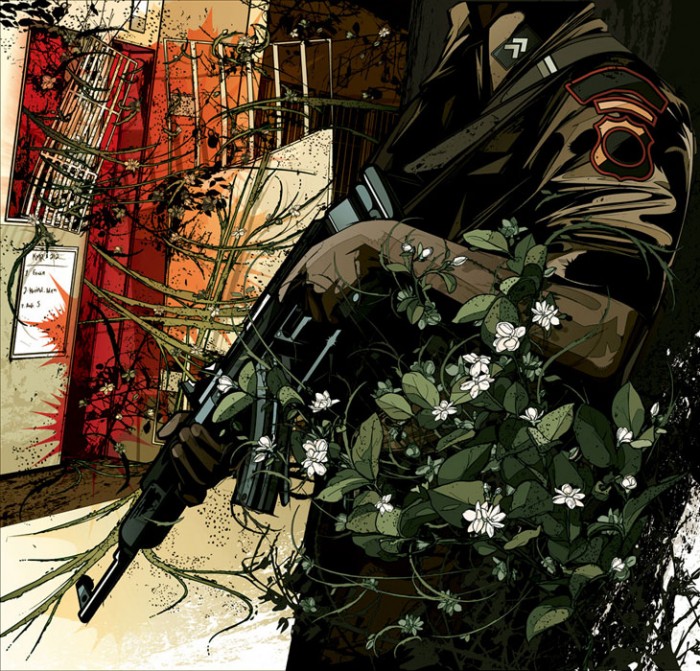