Loving this new piece by MICHAEL BYERS for Rice University called “She Runs.” The article is about Becky Wade’s new book called “Run The World.” From England to Japan, Ethiopia to New Zealand, Becky Wade ’12 spent a golden year after graduation living, working and running with some of the world’s fastest and most fascinating athletes. To check out Becky’s new book go here. 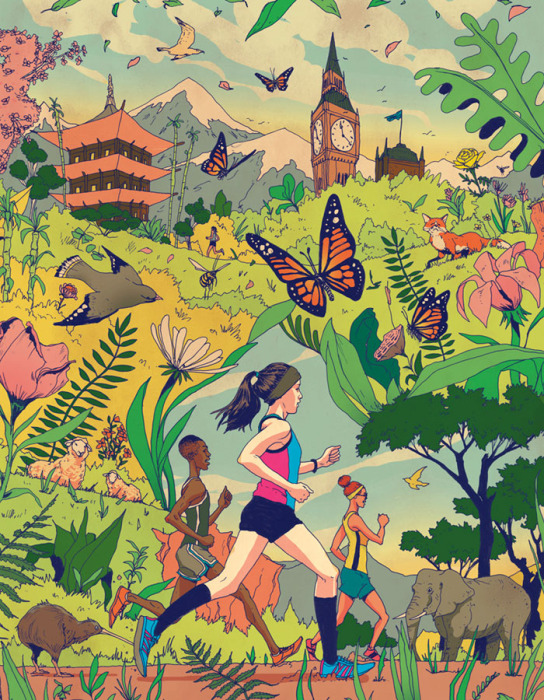 An excerpt taken from Amazon on Becky Wade’s new book:

“From elite marathoner and Olympic hopeful Becky Wade comes the story of her year-long exploration of diverse global running communities from England to Ethiopia—9 countries, 72 host families, and over 3,500 miles of running—investigating unique cultural approaches to the sport and revealing the secrets to the success of runners all over the world.

Fresh off a successful collegiate running career—with multiple NCAA All-American honors and two Olympic Trials qualifying marks to her name—Becky Wade was no stranger to international competition. But after years spent safely sticking to the training methods she knew, Becky was curious about how her counterparts in other countries approached the sport to which she’d dedicated over half of her life. So in 2012, as a recipient of the Watson Fellowship, she packed four pairs of running shoes, cleared her schedule for the year, and took off on a journey to infiltrate diverse running communities around the world. What she encountered far exceeded her expectations and changed her outlook into the sport she loved.

Over the next twelve months—visiting 9 countries with unique and storied running histories, logging over 3,500 miles running over trails, tracks, sidewalks, and dirt roads—Becky explored the varied approaches of runners across the globe. Whether riding shotgun around the streets of London with Olympic champion sprinter Usain Bolt, climbing for an hour at daybreak to the top of Ethiopia’s Mount Entoto just to start her daily run, or getting lost jogging through the bustling streets of Tokyo, Becky’s unexpected adventures, keen insights, and landscape descriptions take the reader into the heartbeat of distance running around the world.

Upon her return to the United States, she incorporated elements of the training styles she’d sampled into her own program, and her competitive career skyrocketed. When she made her marathon debut in 2013, winning the race in a blazing 2:30, she became the third-fastest woman marathoner under the age of 25 in U.S. history, qualifying for the 2016 Olympic Trials and landing a professional sponsorship from Asics.

From the feel-based approach to running that she learned from the Kenyans, to the grueling uphill workouts she adopted from the Swiss, to the injury-recovery methods she learned from the Japanese, Becky shares the secrets to success from runners and coaches around the world. The story of one athlete’s fascinating journey, Run the World is also a call to change the way we approach the world’s most natural and inclusive sport.”